Tragedy has struck an Oregon family after their 8-year-old son died from a flesh-eating bacterial infection January 21.

It all began when Liam Hebard was out playing on his bike in the driveway of his family’s home in Pilot Rock, Oregon. As he sped down a hill that Saturday, he lost control. As Liam crashed into the dirt, the handlebar of his bicycle sliced into his thigh, causing a deep wound.

Liam’s parents rushed him to the emergency room, where doctors administered stitches. At this point, medical professionals did not deem the cut to be serious enough to prescribe antibiotics. Despite the expectation that Liam would fully recover over the following days, the pain began to worsen around the wound, and his parents began worry.

“He said it hurt, but it was his very first accident and he never had stitches before,” his mother Sara told PEOPLE. “I don’t think he was complaining any more than other kid would when they had their first stitches.”

Liam was given Tylenol by his parents to help ease his discomfort. But after three days, the pain increased dramatically. When they checked out the wound to see if it was infected, Liam’s parents were horrified by what they discovered. Liam’s thigh and groin-area was horrifically discolored.

“It was purplish-red and gangrenous looking,” Liam’s stepfather Scott Hinkle added, as reported by Daily Mail. “We threw him in the rig and went like hell.”

Liam underwent emergency surgery to try and remove as much of the infected tissue as possible. Despite their best efforts, the bacteria just kept marching on, destroying any tissue it reached in Liam’s body. “Each time they did a surgery, they kept telling us that they thought they got it,” Hebard recalled. “He was on three of the highest doses of antibiotics that you could get. They were pouring everything at them that they could, but they just kept cutting and hoping. Cutting and hoping.”

After further testing, doctors discovered that their worst fears were true – Liam had contracted the flesh-eating bacteria necrotizing fasciitis. According to Centers for Disease Control and Prevention, approximately 600 to 1200 cases of this infection occur each year in the United States.

Doctors dosed Liam up with as many antibiotics as possible and continued with surgeries, but it was becoming increasingly difficult to contain the spread of infection. He was in excruciating pain.

“The pain was so bad that he was screaming,” Hebard said. “It’s horrific. It is a horrific torture, that’s what it is. The last things I got to hear from my son was him screaming because it hurt so bad.” 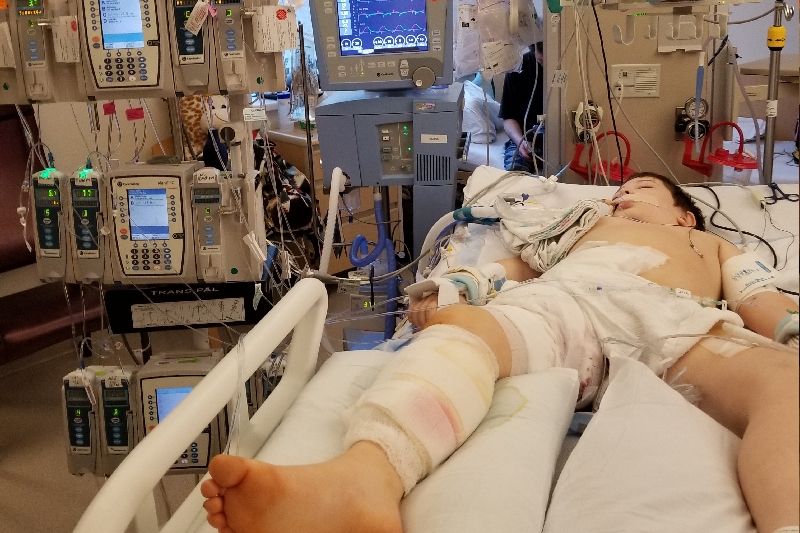 The discomfort got so severe that doctors were forced to place Liam under sedation. In a final effort to treat him, doctors transferred Liam to Randall Children’s Hospital so he could be seen by a specialist team. About a half-hour later, doctors sadly informed Hebard that they had “done everything that they could do.” Liam passed away later that day.

“Liam left this cruel world last night to be with my mom and to watch over me forever. RIP Liam Patrick. Mommy loves you to the moon and back and I will never forget how special you were and the light that shone so bright from you,” the family updated on a GoFundMe page set up to help cover their medical expenses.

“Even though this is my worst nightmare, I want to believe his death had a reason, it had a purpose. Maybe it’s to save other’s lives because no one deserves to go through what we went through,” Hebard said. “Hold your babies tight and listen to them. Just pay attention, and don’t just pass things off as if things will be okay.”

“My heart goes out to the family on the loss of their little boy, Liam. May God bless you all and may God help you through this difficult time,” one person responded to the tragic news. “Liam seems to be a very special and loving boy. May he rest in peace and may his family have comfort in this painful time,” another added.

“Thinking of you all!!! Ive seen the rath of this bacteria. My best friend died 4.5 years ago because of this! My heart hurts for you!”

Liam’s parents are hoping to raise awareness from this largely unknown condition.

“We don’t want any other parents to go through this,” Scott said.

Along with an infected wound, Healthline.com details the other common symptoms of necrotizing fasciitis:

Can you prevent yourself from contracting it?

“There’s no sure way to prevent a necrotizing fasciitis infection. However, you can reduce your risk with basic hygiene practices. Wash your hands frequently with soap and treat any wounds promptly, even minor ones,” Healthline.com notes.

If you already have a wound, take good care of it. Change your bandages regularly or when they become wet or dirty. Don’t put yourself in situations where your wound could become contaminated. The CDC lists hot tubs, whirlpools, and swimming pools as examples of places you should avoid when you have a wound.”

“He was a bright ray of sunshine,” Sara said of her late son. “He loved everyone and everyone loved him. He was one of those people who would walk into a room and would draw everyone.”