Fast-food franchise Chick-fil-A has become synonymous with feel-good stories. The company seems truly dedicated to keeping its customers happy, regardless of the cost or effort, and a recent story out of Texas seems to confirm this impressive track record.

Lindsey Jones was on a road trip with her family when she stopped for lunch at the Lubbock, Texas, Chick-fil-A restaurant. Some three hours later, she realized that she had left her purse behind.

“As my family and I traveled back to Lorena from Taos, NM, we stopped at this Chick-fil-a restaurant to grab lunch to-go. Approximately THREE hours later when we stopped for gas in Abilene, I realized I must have left my purse back in Lubbock at Chick-fil-a. I called and spoke to a very nice woman named Darcy who assured me that they had my purse and would ship it to me right away.”

The mom—perhaps in disbelief at her good fortune—called again just to check that there wouldn’t be any trouble mailing it back to her. She was stunned by the level of kindness and compassion that the Chick-fil-A staff showed her.

“After thinking about all the very important things in my purse that I would need ASAP, I called back and spoke to a manager named Casey. He was incredibly helpful and understanding,” Jones continues.

“He took my purse to FedEx and had it shipped to me ‘Priority Overnight’. With it being a Saturday delivery, and being that I carry a pretty large hand bag that weighed 7 lbs, you can imagine it was NOT a cheap shipment!! When I called to give him a FedEx account number to use to pay for it, he told me not to worry about it because it was already taken care of!!!! I was blown away by the kindness and generosity shown to me by the staff at Chick-fil-a on 4th & Frankford in Lubbock.”

As if that weren’t enough,  the restaurant included something special in the package:

“I woke up this morning to a knock on the door from the FedEx guy with a big box containing not only my purse, but 6 coupon/gift cards for free food at Chick-fil-a, and a couple of plush cows saying ‘EAT MOR CHIKIN’!! I can not thank them enough for everything they did to help me get my purse back as quickly as possible! This situation completely restored my faith in humanity!” 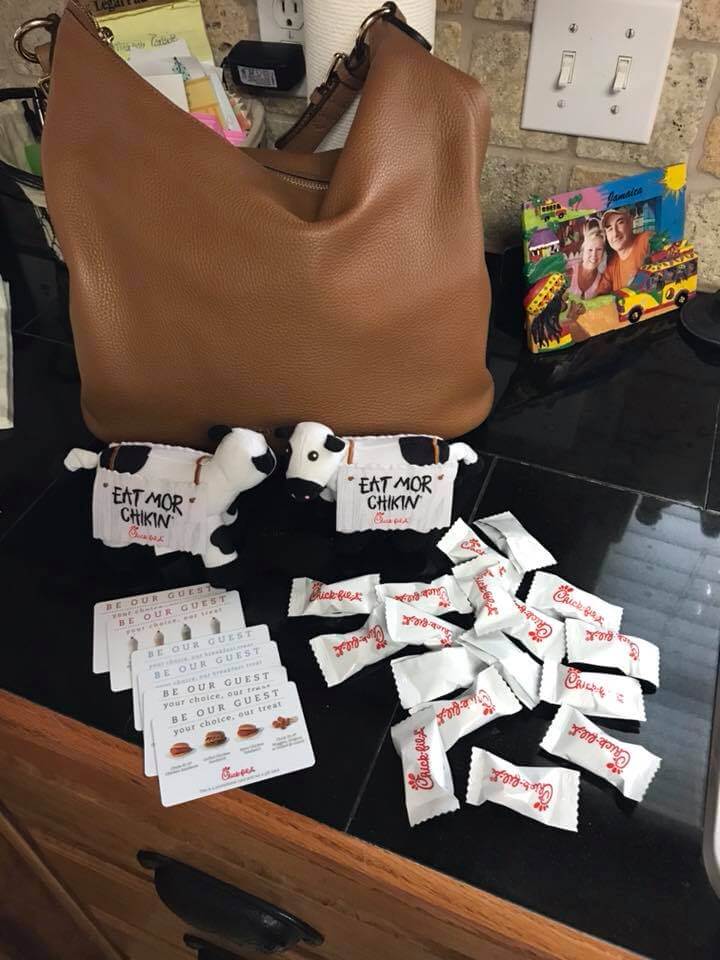 Chick-fil-A, a Christian-owned company, has become famous for  being closed on Sundays and including subtle biblical messages in small-print on its packaging. The restaurant chain’s late founder, Samuel Truett Cathy, was a committed Christian. His family, also Christians, now run the multi-billion dollar company.