A New Jersey mailman knows his postal route and its residents so well that when he noticed something wasn’t quite right at one man’s home, his instincts were able to help save the man’s life.

Tom Logue has been a mail carrier on Long Beach Island for more than 31 years, WCBS-TV reported. He’s been doing his job for so long that keeping track of the regular happenings in the neighborhood has become second nature to him.

“I got a great route. I know everybody on my route,” he told the local news station. “I know their habits. I know what they do, I know where they go.”

When one 86-year-old man hadn’t checked his mail in two days, Logue got a strange feeling. He decided to knock on the door.

When no one answered, he went around behind the home. As he inched closer to the window, he saw the man lying on the ground and “instantly” called 911, he said.

Logue helped to save the man’s life, Harvey Cedars Chief of Police Robert Burnaford said, adding that the mailman has taken his unofficial role of neighborhood watch guard to heart.

“When he goes up and down the streets, if he sees something doesn’t look right, or seems different than normally, he calls police,” Burnaford said.

And this recent incident wasn’t the first time Logue’s compassion saved a life. Six years ago, he noticed a boy caught in a rip current in the ocean, and dove in to rescue him.

“I saw waves come over him — and I don’t think anyone seen him but me — and then when he went under he never came back up again. So I went over there and got him, and then we struggled to get back,” Logue said. 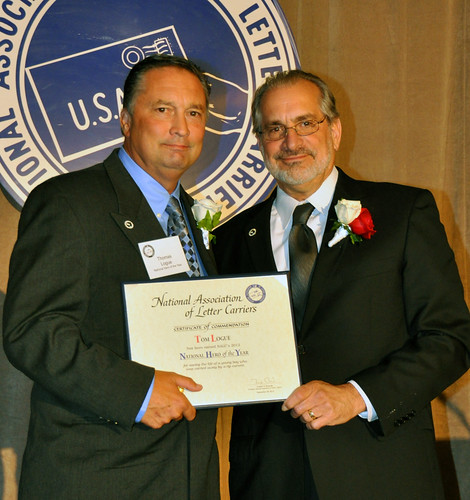 Logue was granted the National Hero of the Year award by the National Association of Letter Carriers in 2012 for his deed.