Alfie Evans’ parents were granted an emergency hearing after their brave little boy fought and breathed on his own for hours and hours, it looked as if there might be some hope that they’d finally get their wish.

‘Doctors are Gobsmacked’: Alfie Evans’ Father Says His Son Breathed for Nine Hours on His Own After Life Support Switched Off

Instead, the court has doubled down and ruled that Alfie must remain in the hospital, according to the Liverpool Echo.

There was an emergency air transport ready to take him to Rome for treatment if the court granted the parents permission, but alas he will not be heading on a transport unless something miraculous changes the circumstances. The judge called it the “final chapter” in the case of this “extraordinary” boy.

New: Alfie Evans family has lost its legal challenge to fly him to Italy for treatment in what judge calls the “final chapter in the case of this extraordinary little boy”

Apparently not special enough for the hospital to grant permission to let the people who love him most, his parents, seek whatever treatment they choose.

Instead, Justice Hayden presided in the Family Division of the High Court in Manchester doubled down, despite the fact that Alfie had been breathing on his own for nearly 24 hours since the life support was removed.

He (the judge) denied the family the right to take Alfie to Rome for treatment – but asked them to consider the possibility of letting Alfie go home.

Michael Mylonas QC, barrister for Alder Hey said the hospital warned parents that he could be alive for “minutes, hours or even days” after his life support was withdrawn. The court also heard how Bambino Gesú Hospital, in Italy, said that the journey to Rome could “do further damage,” and that it could trigger “continuous seizures due to stimulations” of the flight.

It’s hard to imagine inflicting more damage than death, but ultimately that was the prevailing argument in this tragic case.

It was not immediately clear if Alder Hey would give Alfie food and water, even though he’s off the ventilator.

Earlier today, an Italian air ambulance waits outside Alder Hey Children’s Hospital, poised to transport Alfie Evans to Italy, a High Court judge will decide whether or not to allow Italian medical staff to re-assess Alfie’s condition and potentially transport him to a Vatican-associated hospital for further care. The emergency court hearing is set for 3:30pm British time and comes after Alfie was able to breathe on his own following the removal of his life support machine. He has been breathing unaided for over 17 hours now.

BREAKING: Emergency Court Hearing to be Held on Alfie Evans After Toddler Seen Breathing on His Own

‘Doctors are Gobsmacked’: Alfie Evans’ Father Says His Son Breathed for Nine Hours on His Own After Life Support Switched Off

“Clearly, the hospital and court believed that by removing life-supporting treatment, he would pass away within minutes, but that proved to be false,” said Roger Kiska of the Christian Legal Centre, the legal firm representing the Evans family.

“Ventilation support was withdrawn at 9:20 pm. Contrary to all the expectations of the doctors, Alfie continued to breathe independently. The doctors had said that Alfie was being kept alive by artificial ventilation, and that he would die shortly after its withdrawal.”

The judge presiding over the case, Justice Hayden, determined that Alfie’s life support should be immediately withdrawn yesterday after doctors convinced him that the child would not be able to survive unaided. He was proven wrong, and will now rule on whether Alfie is given the green light to be transported to Italy for further treatment. 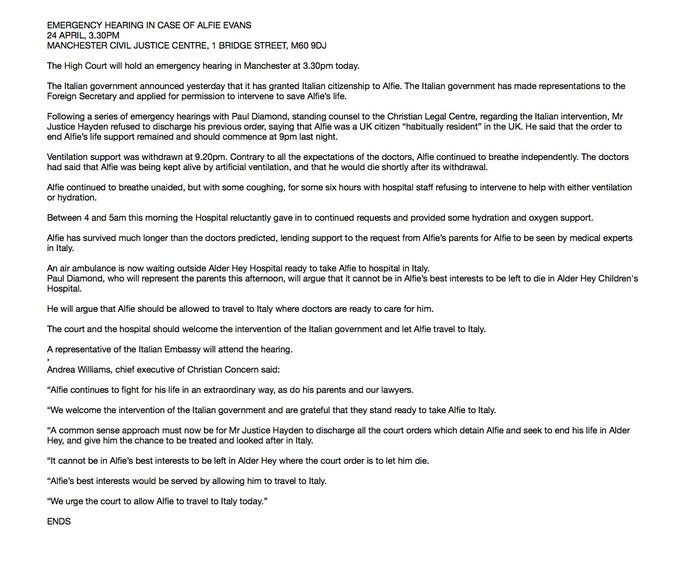 “Alfie has survived much longer than the doctors predicted, lending support to the request from Alfie’s parents for Alfie to be seen by medical experts in Italy,” the press release continued.

“It cannot be in Alfie’s best interests to be left in Alder Hey where the court order is to let him die,” said Andrea Williams of the Christian Legal Centre.

“The doctors are gobsmacked,” Tom evans told press earlier this morning. “And I do believe he will need some form of life support in the next couple of hours and I think he ought to be respected and given that.”

Aflie’s mother Kate James revealed that Alfie has now been given the oxygen and water he required to be kept alive. “Alfie has been allowed oxygen and water!! How amazing is he,” she wrote on the Alfie’s Army Facebook page. “No matter what happens he has already proved these doctors wrong – how beautiful does he look.”

This latest development comes after Alfie was granted Italian citizenship in a bid to have him transferred to a Vatican-associated hospital for further treatment.

Foreign Minister, Angiolino Alfano, and interior minister, Marco Minnitti granted Alfie citizenship in hopes that he could be transferred to Italy.

“The Italian government hopes that being an Italian citizen will allow for the child’s immediate transfer to Italy,” the statement read.

“At 3:30pm, we go back to court in Manchester to stand before Justice Hayden, we cannot discuss why there are court proceedings going on until later,” read an admin post on the Alfies Army Facebook Page. “Can we all light a candle for Alfie or say a little prayer, as he has been breathing continuously for almost 17 HOURS.”

The son of Billy Graham, Franklin, also appealed for prayers. “I cannot imagine a more heart-wrenching situation for a mom and dad to be in,” Graham wrote on Facebook. “Liverpool parents Tom Evans and Kate James need our prayers. Their son Alfie Evans had his life support withdrawn yesterday and now they’ve been granted an emergency hearing. Pray for little Alfie and pray for these parents as they fight for their son’s life.”

Life support was taken away from the 23-month-old boy, who has a rare degenerative neurological condition, at 9.17pm Monday after a final attempt to appeal to the high court was denied. Justice Hayden said the legal plea was a “last-ditch appeal” and that he was “not going to provide more time.” Since then, Alfie’s father, Tom, has told the press that his son was able to breathe unaided for over nine hours before doctors administered vital oxygen and water to the sick toddler. Evans said it was obvious that his son was breathing unassisted “within a few minutes” of life-support being withdrawn.

“They say Alfie’s suffering. He’s not even on a ventilator and he’s not suffering,” Tom Evans said outside the hospital where his son is being treated. When asked what treatment doctors had been administering to his son, Mr. Evans replied: “They left him for six hours without food, water and oxygen. “I felt blessed when they confirmed they were going to give him his water and his oxygen.”

“He’s now on oxygen. It’s not changing his breathing but it’s oxygenating his body,” Evans added. “He is still working, he’s doing as good as he can.”

“He’s still breathing now,” Evans continued, according to Sky News. “It’s come to a point when his mum’s actually asleep next to him so she can go to sleep, she feels comfortable with him.”