Stephen Baldwin’s daughter, model Hailey Baldwin, is engaged to pop sensation Justin Bieber. As the news broke, Stephen, who is a committed Christian, took to Twitter to offer his congratulations.

“Sweet smile on my face!”  he wrote. “Always pray 4 Gods will!! He is moving in the hearts of JB&HB. Let’s all pray for His will to be done.”

Baldwin has since deleted the tweet but CNN and other outlets are reporting the rumors are indeed true.

Actor Stephen Baldwin: ‘You Can’t Be Pro-Choice and Call Yourself a Follower of Jesus Christ’

Here is a screen shot of the original post: 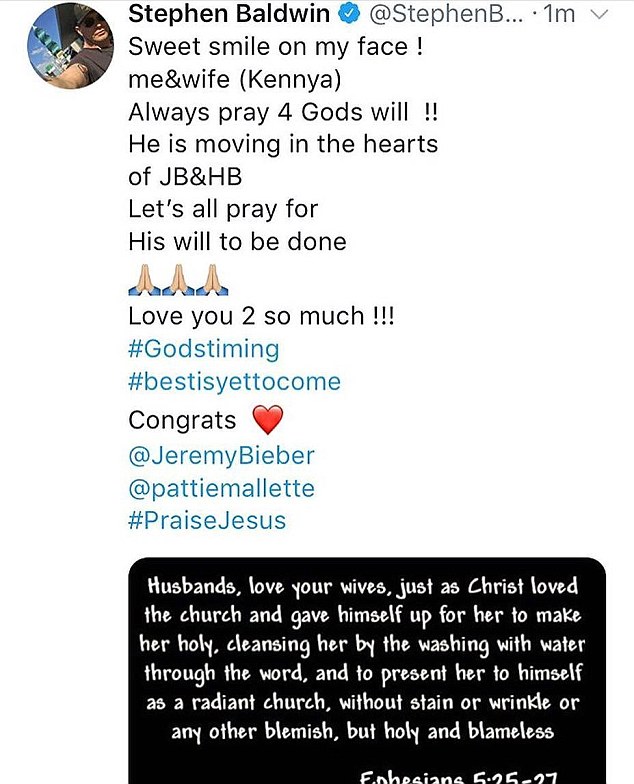 Hailey has posted regularly about her dad on social media, declaring that he is her “most favorite person ever.”

Happy Birthday Daddio. You are my most favorite person forever and ever. I love you ?

Bieber and Baldwin were spotted hanging out in the Bahamas yesterday, where an eagle-eyed Twitter user spotted a huge rock on Hailey’s finger:

well my friend just met justin bieber and hailey baldwin in the bahamas and she is wearing a ring pic.twitter.com/vYx6aEQQjS

Other keen followers Bieber’s personal life managed to snap video of the pair dancing together on vacation.

Bieber’s dad, Jeremy, also took to social media to offer his congratulations: “@justinbieber Proud is an understatement! Excited for the next chapter!” he wrote.

@justinbieber Proud is an understatement! Excited for the next chapter!

Bieber has become increasingly vocal about his faith in recent years, taking to Instagram to share his love for Jesus with over 100 million fans who follow him on the photo-sharing app.

Jesus is changing me from the inside out everyday! AND I MISSPELLED GUILT and exhausted

He has also been known to break into faith-filled songs at his stadium-packed shows. In April, the pop megastar was filmed leading a smaller group in a time of worship.

Baldwin herself is no stranger to using her social media platform to spread the gospel — she is often seen posting devotionals and prayers to Instagram.

“I don’t think anybody should be afraid to represent or talk about it, even though I feel there’s something about Christianity that makes people very touchy,” she told Fashion magazine last October. “Definitely, at times — even now — it’s hard for me. Which is why, now in my 20s, I try to surround myself with people who believe the same thing I do — who follow it and are open to it — because it’s too hard to constantly get people to understand what I do if they just aren’t interested in it.”

Congratulations to the happy couple!