How strong will Hurricane Florence be when it hits landfall with full force? If this live camera shot on YouTube from Explore.org is any indication, it will be incredibly strong.

Take a look at this live camera shot below, which at time of publication was still in hanging on by a few threads, from somewhere out in the Atlantic Ocean. The sound of the wind provided a glimpse into just how intense this storm truly was at that moment — now, all is calm and the flag somehow still stands.

Storm surge is the deadliest consequence of hurricanes and we're already seeing some effects from Florence. Watch as an interior wall is ripped off a frame from a beach house near the coastline as captured by our field correspondents. pic.twitter.com/nc5MyC9ckN

This video was taken on Seabreeze Dr near Rodanthe, NC. pic.twitter.com/hIbkZMpsls

What should we expect?

While many in the Carolinas — particularly in Wilmington, N.C., and Myrtle Beach, S.C. — have already started to feel Hurricane Florence’s impact, the center of the storm is expected to make landfall sometime after 8 p.m. Thursday.

Hurricane Florence was downgraded to a Category 2 storm Wednesday night, leading some to think the impact might be less dangerous. However, the hurricane is still approaching the East Coast with maximum sustained winds around 105 mph and gusts of 125 mph. 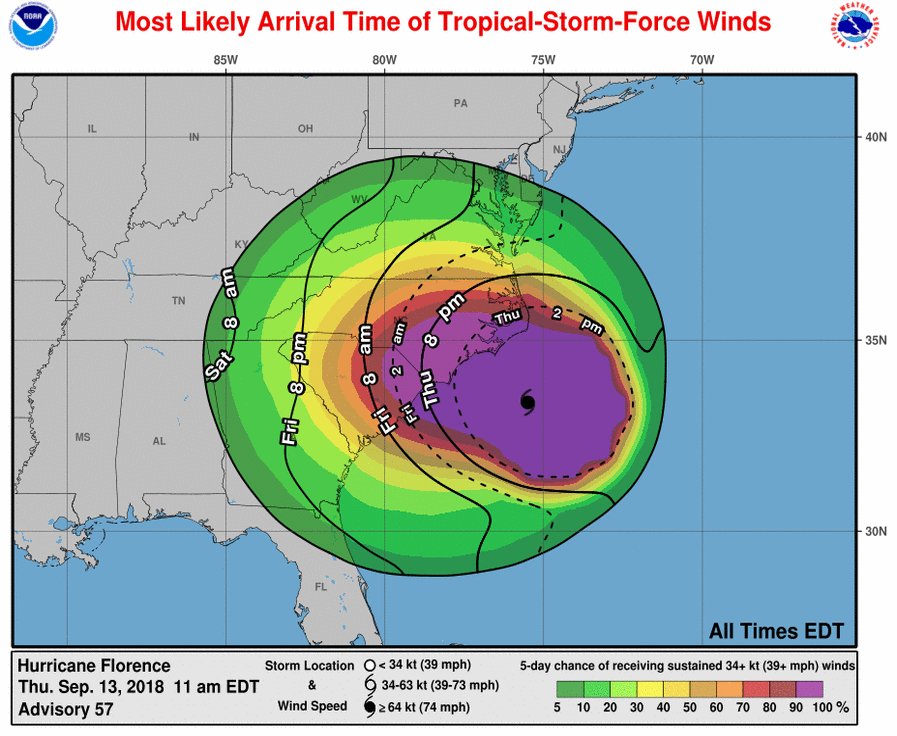 “Wind speed may have dropped some from yesterday, but we traded that for a larger wind field,” Cooper said Thursday morning, noting the width of the potential impact now stretches for 200 miles.

What can you do?

Faith-based charity organizations like Operation Blessing International and Samaritan’s Purse, which is headquartered in North Carolina, are preparing now to aid those who might be impacted by Hurricane Florence.

The Rev. Franklin Graham, president of Samaritan’s Purse, appeared on Fox News Thursday morning, urging those who are able to volunteer to help with potential rescue and storm relief.

“The hands and the feet that actually are on the ground, that’s gonna be done by volunteers,” he explained. “And again we need an army of them. We need hundreds of them to come help us.”

.@Franklin_Graham on @SamaritansPurse and hurricane recovery: “The hands and the feet that actually are on the ground, that’s gonna be done by volunteers. And again we need an army of them. We need hundreds of them to come help us.” https://t.co/brbzgnVWmy pic.twitter.com/MKAadhuanC

Operation Blessing International, based in Virginia Beach, is setting up two staging areas. One will be in Emporia, which the charity said in a press release is “strategically-located west of the coast and is also adjacent to Highway 95, which runs south towards what is anticipated to be the hardest hit areas from Florence.”

The second area will be located in Virginia Beach at the Christian Broadcasting Network headquarters. Both locations will have mobile kitchens capable of making 9,000 hot meals in Emporia and up to 3,000 in Virginia Beach.

Other organizations, like World Help, are also taking donations that will go to those in need as Hurricane Florence makes its way through the Carolinas:

#HurricaneFlorence is projected to strike the Carolinas this week with devastating force.

Those affected will need necessities like food, hygiene items, and bottled water. All it takes is $50 to send emergency supplies to one person in need: https://t.co/s0NLJwcc3U pic.twitter.com/ugKkjSQpg2

Please continue to be in prayer for all those in the path of Hurricane Florence and for the first responders and volunteers positioned to help those who might be hurt by the storm.